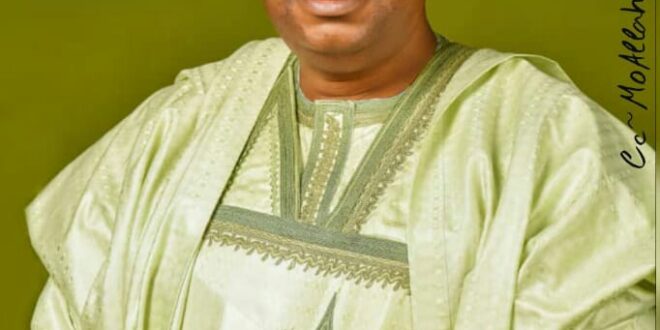 FACT-CHECK: How true is TG NEWS publication that Adamawa Chairmen fought over an alleged financial donation to ALGON?

Adamawa PDP Chairman, A.T Shehu slam Umar Ardo says he is a tenant running his mouth and threatening to give quit notice to the house owner

The online news medium made this claim in its publication two days ago.

In the publication, the medium claim.”

“It was a show of barefaced shame as two irate Adamawa Local Government Areas Chairmen on Monday abused the sanctity of the Government House Yola (GHY), office of the State Governor Ahmadu Umaru Fintiri when they caused a commotion in their attempt to fight a fellow Chairman right at the hallowed chambers of the Governor’s office.

Our correspondent who was there to cover their solidarity visit to the Governor Fintiri reported that the two chairmen abused protocol in their wild inhumane desperation to lynch a fellow Chairman who exposed them for conspiring to deny others the sum of money realised at join accounts meeting for the activities of the Association of Local Government of Nigeria (ALGON), an umbrella body of LGAs chairmen in the state.

According to a Closed Circuit Television (CCTV) footage which captured the ugly incident that happened at the GHY when the 21 LGAs after their solidarity visit, the Maiha LGA, Dr Idi Aminu drew the attention of the ALGON Chairman, Alhaji Jingi Rufai over money the governor gave in running the affairs of the union was cornered by two Chairmen.

“According to a Closed Circuit Television (CCTV) footage which captured the ugly incident that happened at the GHY when the 21 LGAs after their solidarity visit, the Maiha LGA, Dr Idi Aminu drew the attention of the ALGON Chairman, Alhaji Jingi Rufai over money the governor gave in running the affairs of the union was cornered by two Chairmen.

All the allegations contained in the publication by the news medium could not be substantiated.

According to Adamawa state ALGON secretariat, the governor has never give running cost to ALGON as the JAAC is a meeting of chairpersons of twenty-one local council of Adamawa state.

The Finder can authoritatively report today that no CCTV worked in the Adamawa state government house, Yola to have to warrant anyone having such a record, a government house source told this news medium that he couldn’t remember that last time the CCTV camera work talk more of recording any social gathering.

According to information available to this medium, the two chairmen the online medium claim fought over the alleged running cost are not exco members of the association to warrant anyone handing over such cash to them as they claim in the publication by the online news medium.

A member of Adamawa state chapter of ALGON and a chairman of one of the local council that pleaded anonymity told our correspondent that Messrs Sudi and the unnamed chairman could not fight over what they cannot superintend on as the ALGON chairman and the secretary are the only authorise exco members to see the distribution of such money if the story of TGnews is anything to go by, the source said

The claim by the online news medium that two chairmen fought overrunning cost given to ALGON by Governor Fintiri of Adamawa is, therefore, FALSE.

Fintiri to council chairmen: no evidence of projects, no reelection