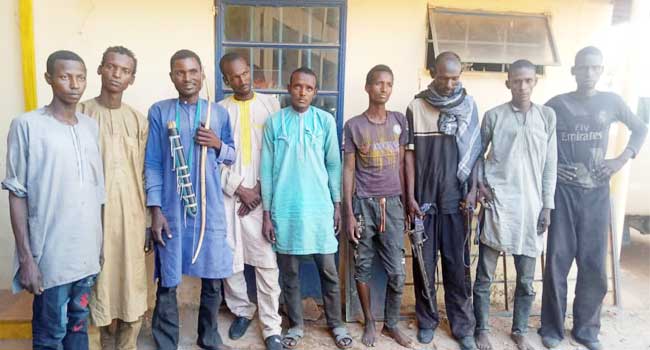 In a statement issued on Monday, the Police Public Relations Officer in the state, Yahaya Nguroge, the suspects was in possession of locally-made guns and other dangerous weapons.

According to the police spokesman, the suspects were involved in the abduction of one Babawuro Damuwa and Yerima Musa of Song area of the state on December 18.

The suspects, all residents of Dapchi in Yobe state and Song in Adamawa were said to have conspired, kidnapped and demanded the sum of ₦4million as ransom from their victims.

On the successful arrest of the suspects, the PRO said the Commissioner of Police, Olugbenga  Adeyanju, swung into action by deploying combined operatives of police operatives, and hunters who eventually rescued the victims and apprehended the suspects.

He explained that based on findings, the first and the second suspects came all the way from Yobe State and recruited the third to ninth suspects and they eventually formed a syndicate to be carrying out kidnapping activities.

Upon the completion of the investigation, the suspects would be charged to court for the prosecution to serve as a deterrent to others.