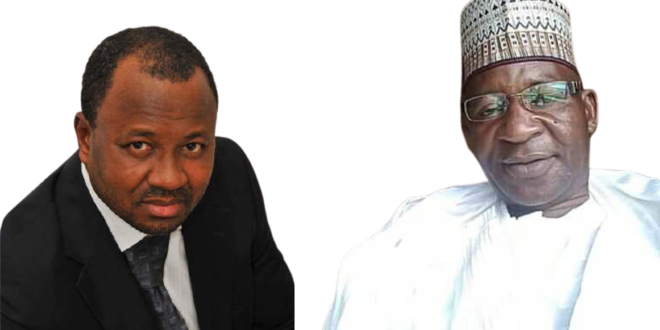 Adamawa PDP Chairman, A.T Shehu slam Umar Ardo says he is a tenant running his mouth and threatening to give quit notice to the house owner

The Adamawa state chairman of the people’s Democratic Party A.T Shehu has described the faction chairman of the reform PDP in Adamawa Umar Ardo as a “political wanderer, who does not deserve the attention of sane minds.”

The state party chairman said it was funny that Umaru, who has been suspended from the party in Adamawa state for an anti-party activity, was accusing Governor Umaru Fintiri of planning to destroy the PDP by convening the party stakeholder meeting without consulting him Ardo and Grace bent to be present at the august meeting gathering.

According to Shehu, it was shameful that Ardo, who has tried in vain severally to bring any government in power to it kneels without succeeding and still wandering in the wilderness of politics, took Governor Fintiri’s predecessor to court in 2015 and was branded as an interloper by the supreme court, went ahead to work against the party in the last general election want to be part of stakeholders meeting in Adamawa knowing fully well he is no longer a member of the PDP.

Despite suffering a heavy blow as the apex court threw out his petition, it resulted in verbal attack and accusation against the government of the day till the end of time has again resulted in the same tactics of aggression against the present administration, thinking it will be business as usual.

The state party chairman likened Umar Ardo’s statement to that of a tenant running his mouth and threatening to give quit notice to the house owner.

Shehu said it would wait to see how Umar Ardo, who is placed under suspension in the PDP, will be cleared to contest any party’s elective position in contravention of Section 8(A and B) and Section 9 of the PDP Constitution (2017 as amended).

He said:” it is funny that a man like Umar Ardo, who enjoyed all the privileges that PDP can offer, want to sabotage the party in Adamawa state due to unbridle interest is the one sermonising about loyalty and commitment to the PDP.

“The earlier Umar Ardo and his co-travellers realised that the governor is the party leader in the state, the better for him and those hallucinating about been a stakeholder of the party in Adamawa, that must be invited before any discussion regarding the party be held.

“If the party in Adamawa state is destroyed as a plan by Umar Ardo and those that did not wish this administration well, will there be anything left in the PDP by now that he will want to come and superintend over?

“If Gov. Fintiri did not destroy PDP during the four years that the party was in opposition in Adamawa, is it Political Wanderer Umar Ardo that will now know who wants to destroy PDP?”

@@THEFIND35373560
Previous Fintiri to council chairmen: no evidence of projects, no reelection
Next Umar Ardo, Grace Bent are moles in PDP; as his agent abandon him in every contest he participated in Adamawa -A.T Shehu