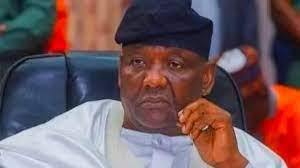 The Chairman Adamawa first Initiative has told Adamawa Deputy Governor, Crowther Seth, to wait until he explains how details dealings between him and his Boss the governor was leaked to Sahara reporters before sermonizing, denying the authorship of the story published by the online medium to impugn the integrity of the governor.

The CSO Caesar made this known in a statement on Friday by its Publicity Secretary, Pwanovi Mathias.

The civil society organisation called on the deputy governor to explain the 17 million naira running cost accrued to his office monthly and how all the internal dealings between him and governor Fintiri was leaked to the online medium.

The CSO said, “The Deputy Governor owes it as a personal moral burden to directly explain how Sahara Reporters got all the information it published on its website as no outsider could afford the details allegation published to impugn the character of his benefactor, instead of the lame attempts to dismiss the allegation and divert public attention.

“What has Crowther Seth to say on the revelation by Sahara reporters that he is the only deputy governor in the history of the state who is given one air ticket anytime he is on duty tour outside the state or country.

“or Sahara is now a spirit to know that all his accumulated allowances for those travels amounting to over N35 million have yet to be paid after over two years in office.

“also, they know there’s no backup vehicle in the deputy governor’s convoy. His monthly running cost was slashed to N17 million from N37 million previously enjoyed by his predecessors.

“What is his answer to the enormous allegations published by Sahara Reporters that the governor is maltreating him?

We expect the deputy governor to tell the world what he is doing with 17 million naira he claims been giving to him monthly by the governor.

“The Deputy Governor should therefore advise himself properly by responding to the vast misinformation published by the online medium to embarrass the governor who unilaterally picks him as his deputy against all odds.