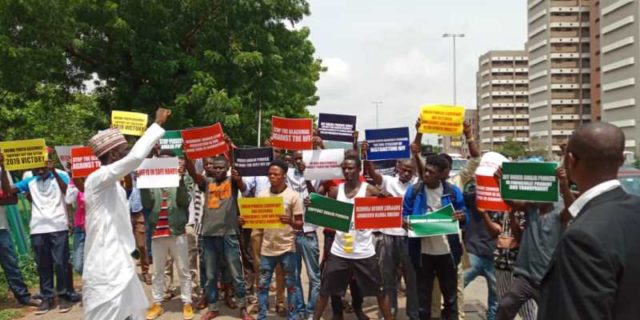 Scores of protesters on Monday marched on the major roads around the three arm zone and federal secretariat in support of Amaju Pinnick, President of the Nigeria Football Federation (NFF) who is currently under trial.

Pinnick and four other officials of the football house are in court for allegedly misappropriating $8.4 million.

The money was said to have been paid by FIFA to the NFF as appearance fees in the group stage of the Brazil 2014 World Cup.

Justice Ijeoma Ojukwu had issued an order of arrest following the absence of Pinnick and four others in court to answer to the charges after the prosecuting lawyer, Celcius Ukpong, orally applied for their arrest, a request the judge granted.

The Federal Government had through the Special Presidential Investigation Panel on the Recovery of Public Property, filed 17 counts before the court, accusing the NFF officials of allegedly misappropriating money belonging to the football body.

But the protesters under the auspices of Arewa Youth Assembly (AYA) stormed the Federal High Court Abuja, during the trial saying “Pinnick was being witch-hunted”.

Mohammed Danlami, Speaker of the group said the trial of the NFF boss and others would best be described as “football interference” which FIFA abhorred.

Danlami said the protest became necessary to draw the attention of the National Assembly, Presidency and the world to the interference and smooth running of football in Nigeria.

“Pinnick has administered football in Nigeria in a more coordinated and prudent manner and only need to be commended instead of this present humiliation.

“He is the Vice President of the Confederation of African Football (CAF) and his office deserves some respect.

“Nigeria has a lot to benefit from that office but, we can see that the reverse is the case,” he said.

Some of the placards had inscriptions like “Amaju Pinnick leadership has restored confidence, love and hope in the sports industry”, “NFF is in safe hands”, “NFF under Amaju Pinnick is financially prudent and transparent”, among other comments.

The protesters were also at the National Assembly and Eagles Square chanting different songs in solidarity with NFF leadership.