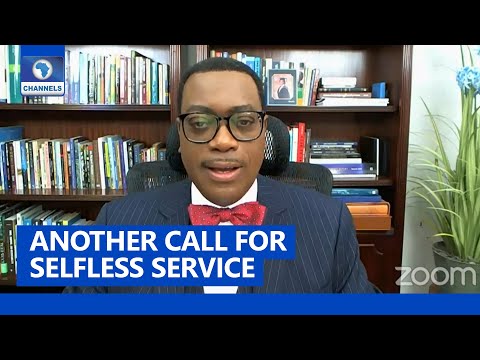 Nigeria’s Akinwumi Adesina has described his re-election as the President of the African Development Bank (AfDB) as historic and another call for selfless service to Africa.

Dr Adesina spoke about his re-election during the closing session of the 55th Annual Meetings of the bank which held virtually on Thursday.

“Of course, right now, the sound that is the loudest in my ears is the announcement of my re-election as President of the African Development Bank for a second term,” he said.

The AfDB president believes his re-election is important and has shown the transparency of the bank and the demonstrated weight of support behind his vision.

“It shows a very clear and strong mandate from all shareholders to go and implement the vision, it shows that all voices were heard, it shows that we are true to the constitutive test of our bank,” he added.

RELATED
Adesina Re-Elected As AfDB President
‘He Deserves It’: Buhari Rejoices With Adesina On AfDB Re-Election

Adesina thanked the Governors of AfDB’s 81 member countries, the bank’s shareholders and members of staff for his re-election.

He believes AfDB has shown its high level of standards and commitment to transparency and good governance.

The AfDB president said he was grateful for the collective trust, confidence, and support shown by the governors and the others.

He stated his readiness to work closely with them for the urgent and difficult task of supporting Africa to rebuild it better, smarter, and boldly following the COVID-19 pandemic.

Adesina informed the shareholders of the AfDB that he and the board of directors, as well as the senior management and staff of the bank, would need their support for the bank to play its leadership role.

He said, “It is yet another call; a call for selfless service to Africa and the African Development Bank.

“Dear governors, you steadied the bank, you stabilised the bank’s leadership, you strengthened the bank, you reinforce our collective vision, you decided for continuity to build on what we have achieved together over the past five years.”

Giving an update on the 2020 annual meetings of the bank, the AfDP president disclosed that issues discussed included how to further strengthen the institution and deepen governance and accountability systems in Africa.

According to him, other issues that came up are regional trade, regional integration, climate, gender, youth, and jobs, debt sustainability, and focusing on quality health infrastructure to build economic resilience for Africa.